Getting ready for 6M TEP

I was very fortunate to experience the magic of 6M for the first time during a few days in March and April this year. I was using a pretty simple setup for 6M, a 3 element Yagi and my IC756 Pro 3.

Working DX on 6M is made easier by utilizing the great facilities such as the ON4KST chat facility and other VHF web sites.

Today I came across a most useful site “6M online” amongst other things it has a online archive of DX QSO/Spots made mapped onto a world map starting from 1 January 2011. This is most useful, pity it does not go back even further in time.

I made many 6M DX TEP QSOs during 28 March and 8/9 April 2011 and these opening can clearly be viewed in this archive.

The good news for Southern Africa stations is that we should have similar TEP openings again in September and October during the upcoming Equinox period.

This coincides nicely with the 7P8EME DX expedition 16 – 29 September.

Time to get the stations ready……

Email ThisBlogThis!Share to TwitterShare to FacebookShare to Pinterest
Labels: 6M

Wow !!
I have just been made aware of Daniel WG5G and his QRP achievements.
It is absolutely mind blowing (amongst other achievements) :  DXCC Honors role using only QRP
And some still say life is too short for QRP?
Check him out on QRZ.com 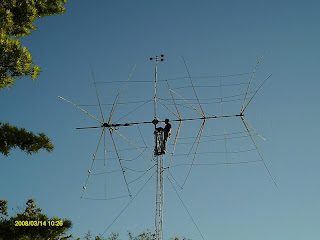 Email ThisBlogThis!Share to TwitterShare to FacebookShare to Pinterest
Labels: QRP

I cannot help, but wonder where our great hobby is heading. I have witnessed numerous discussions of late and realized the lack of technical knowledge that seemingly exits in our ranks. There was a time when all amateurs had to be technically competent, but unfortunately I think these standards have been eroded.
In a desperate attempt to bolster the amateur numbers we have lowered the technical standards and removed additional criteria’s such as the code proficiency requirement. These measures most likely have had a beneficial effect as far as the numbers go, but at what expense?
I know we cannot live in the past and we need to move with the times. And there have been many very exciting new developments in our hobby and I don’t want to understate this, but at the very core of Amateur Radio is communication via radio. We need to understand radios, modes of communication, antennas and propagation. If we don’t understand these basics we are lost.
I find it quite disturbing that there are a few amongst us that don’t even seem to be a desire to learn the basics.
Some might think that I am being conceited; I can assure you it is not the case. It certainly would be nice if we could get back to a standard where we are once again proud to say: “I am a Radio Amateur”
Posted by Pierre at 09:00 1 comment:

I have been monitoring a discussion on the SARL forum regarding operating practice during local contests. It has become quite clear to me that we don’t all share the same views when it comes to local amateur radio contesting.
The amateur community is basically split into 3 separate groups:
The first group doesn’t like contesting in any form and they would rather not see any contest taking place. They normally don’t make any contest QSOs.
The second group will make contest QSOs, but in a half hearted way. They don’t care how many stations they work nor do they care about submitting logs etc. They most likely make up the bulk of the contesters log. Obviously their participation is much appreciated by the more serious contesters.
Then we have the contesters that are in the event to win. They will be doing whatever it takes to make as many QSOs as possible in the allocated time in an attempt to build the highest possible score.
It is therefore obvious that the 3 groups have quite diverse opinions on what is deemed appropriate or inappropriate behaviour during a contest.
Issues that come to mind are:

Exchanging pleasantries like name, QTH and size of boots etc during a contest vs sending only the minimum required contest exchange.
Having a ‘rag chew’ in the contest preferred sections of the band.
I have been very active in domestic contests for a quite few years now. I have no doubt that taking part in contests is most beneficial in terms of award hunting, testing the effectiveness of one’s station, practicing concise, effective communication and having fun.
Sadly, not many seem to share this idea and I cannot help but wonder why there seems to be a general apathy toward local contests.
If only the Ionosphere would allow more regular QRP QSOs further afield, then I would actively take part in the QRP contests hosted by our friends in North America and Europe.
Oh well …….
The link below is a very well written FAQ on the topic of contesting written by Andrew Roos ZS1AN now ZS5AA:
http://www.qsl.net/zs1an/contesting_faq.html
Posted by Pierre at 16:05 No comments:

Email ThisBlogThis!Share to TwitterShare to FacebookShare to Pinterest
Labels: Contests

I have just returned from a most interesting activity.
During the past week, I received an email from Glynn ZS6GLN, to ask if I was willing to participate in a fox hunt with a difference.
From my understanding two very rare (threatened species) of African Black Footed Cats were released a while back in Ezemvelo Nature Reserve. Both the cats are fitted with small radio tracking collars. The daily movements of the cats tracked and the data logged. The male cat had left the nature reserve and was heading in a South-Westerly direction. He had apparently done something similar on two prior occasions and returned a few days later. This time he had not returned and the last sighting was on 23 July, 14 days ago.
Someone responsible for these cats decided to contact the South African Radio League, to see if they could assist. Then things moved fast. Dennis (the president of SARL) contacted Glynn. Glynn in turn set up a well, thought out plan of action, to see if we could find the critter.
Today, Saturday, I set my alarm for 2:30 AM, to meet the assembled team of fox hunters at the rendezvous point at 4 AM. I was pleasantly surprised to see how many Radio Amateurs volunteered their help. 13 people, 6 vehicles and a helicopter. The vehicles were filled with all sorts of tracking equippment, some resembling porcipines with all the antennas. The helicopter flown by Hennie ZS6EY joined us just after sunrise.
The search started at around 4:30 AM and ended at around 10 AM. In the process I traveled 240 km, including some spectacular off road tracks over a mountain ridge and down to a very secluded spot by the Wilge river, within the Leopard Lodge private reserve.
Unfortunately, no one heard anything. Not even the slightest "beep" was heard. Realistically, I guess our chances were very slim. Once the hunt was called off we regrouped at Ezemvelo NR for a light lunch. After lunch, I went to search for the female cat that is in the reserve. I did find her and so did Glynn and company.
Actually the cat was quite easy to find since Glynn had beat me to it and they were wearing bright clothes, so I could see them from about 3 km away Hi…. Jokes aside, the signal emitted by the tracking collar is not very strong. I did a range check and the signal disappeared 300 metres either side of the spot. The cat was hiding in a very shallow depression of approximately 200 mm below ground level at the time.

The Radio transmitter has a ERP of only 0.09 milli watt and transmits a 20 mS long "beep" at a rate of 55 ppm. According to the specifications the battery should last 845 days. This sure is QRPp in the extreme, quite impressive....
This sure was an interesting day. Pity we did not find the missing male, but it was fun and I think we are all somewhat more prepared to do the same in the future, should we be called upon to do so.
73, Pierre ZS6A

It might be worth monitoring 150.623 MHz (+/- 3 kHz) best heard on CW or SSB.
If a short beeping signal once every second is heard then maybe it might be from the cat in question.