Yesterday we had the 1st of 4 legs of our local QRP contests. Earlier on I had made a commitment to concentrate more on CW this year in a bid to boost and support local CW.

I had plans to operate a small field station from the local park were foiled due to the inclement weather. I thus decided to operate from home and this turned out to be a good idea. We had several thunder storms move through and I would have had no choice, but to cut my operation short, had I operated as planned.

All said and done, I managed to make 29 QSOs of which 13 were on CW. I was very pleased to see the support for CW; this bodes well for the future.

I had a ZS1 station, I thought it was ZS1AAZ, but after much deliberation I realized it must have been my good friend Adrian ZS1TTZ. With QRN and poor conditions prevailing we did not have a QSO. Maybe next time….

Maybe QRP is for the birds, but I can say without hesitation that there is a certain thrill working distant stations with a home built radio and at power levels hardly enough to illuminate the bulb of a small penlight flash light. Combine this with the outdoors and field antennas, then we have magic?

I have been rather busy the last while and did not have the inclination to blog.

The last weekend I took part in one of our VHF contests and had much fun. I still amazes me that how effective WSJT can be. I operated on the 6m band exclusively. Almost all the contacts were as result of random meteors.

I am very pleased with the performance of my new 6M5XHP Yagi. It seems to work very well indeed.

If only VHF was more popular in Southern Africa.......

The chances are good that Eddie ZS6BNE and I were the last to copy signals from the above satellite.
The signals were very poor compared to the last few passes we witnessed in the last few days. The MP3 recording I made clearly indicates when the transmitter switched on at 03:57:48 UTC the SSTV transmission begins some 10 seconds later. A very noisy image was recorded with some fairly strong audio telemetry that followed that end then disappeared into the noise.
According to the Live OSCAR Satellite Status page it was not heard again. Did we have the dubious honour to be the last to hear the satellite before it re-entered and burned out?
http://myhome.mweb.co.za/~pierrevd/ARISSAT_04012012_0358_Final.mp3
http://oscar.dcarr.org/index.php
73, Pierre ZS6A
Posted by Pierre at 10:32 No comments:

Email ThisBlogThis!Share to TwitterShare to FacebookShare to Pinterest
Labels: Satellites

I am a little miffed at myself for missing out on a few seconds of the SSTV image below.
The transmissions only begin some 13 seconds after the satellite flies into the sunlit side of the earth. I was flipping between the linear transponder and the FM downlink and I guess I missed out on a few seconds of what could have been an interesting image. I suspect that the transmissions only started part way through the image anyway.
Did manage to have a quick QSO on SSB with Andre ZS2BK, and heard myself clearly on CW as well.
I hope ARISSat will still be operating tomorrow, thus giving us a last chance at capturing the final images. It would be rather cool to witness the last moments before it get destroyed?
Most experts seem to agree that it should re-enter tomorrow the 4th of January 2012 some time.
Posted by Pierre at 09:25 No comments:

Email ThisBlogThis!Share to TwitterShare to FacebookShare to Pinterest
Labels: Satellites

That leaves us (South Africans) with 1 possibly 2 more opportunities (passes) that we can capture the images and messages being sent from this satellite. Rather sad in a way?

The image below was captured this morning just after the satellite switched on, 14 minutes (approx) after being illuminated by the sun.

The ARRISat-1 satellite which was launched by hand from the International Space Station - ISS, in August last year (2011) continues to work very well indeed. It is rather unfortunate that it should be re-entering the earth’s atmosphere in the next few days and burn out as it does so.

The satellite only works when sun lit and that limits the opportunity quite a bit. In my case, that means having one pass in the morning and that is it, until the next day.

In the last few days, I have managed to capture a few very nice images from ARISSat, using the MMSSTV program.

The pre-recorded messages (children’s voices) are very clear. I have no doubt that the signals can easily be copied by any normal mobile installation.

Happy New Year to one and all !! 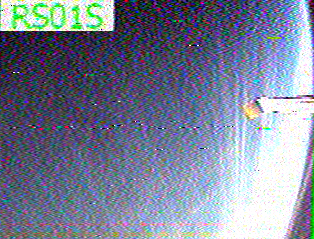 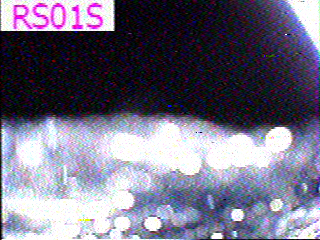 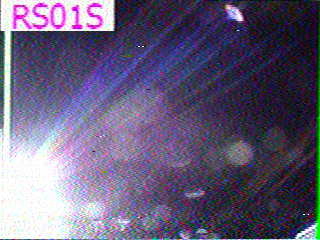